Sox Starting Lineup: Eaton CF, Beckham 2B, Gillaspie 3B, Abreu 1B, Dunn DH, Viciedo RF, De Aza LF, Flowers C, L. Garcia SS.
(Ramirez is out of starting lineup for the first time this season, having played in all 81 games. Robin wanted to get everyone a day off on the road trip).

The Sox rode the wave of four home runs and a strong performance by John Danks last night to defeat the Blue Jays, 5-4, in the second game of the four-game series. Jose Abreu connected with a pair of solo shots, his 24th and 25th of the season to tie for the major-league lead, Alexei Ramirez went deep with a two-run blast, his eighth, and Dayan Viciedo added his seventh with the bases empty…Danks got credit for his seventh win, allowing just two runs on five hits and a pair of walks in six innings pitched…Jake Petricka went 0.2 innings in the ninth for his second save of the year.
Here are the four homers in the order they were hit: Abreu and Viciedo in the 5th inning and Abreu again and Ramirez in the seventh:
http://atmlb.com/1pzPcrQ
http://atmlb.com/1pzPi2G
http://atmlb.com/1pzRPKt
http://atmlb.com/1pzSnQy More Abreu
Jose now owns a 12-game hitting streak, batting .367 with six home runs and 12 RBI during that span…he has also reached the 25-homer mark the fastest in MLB history and is the first rookie with 25 home runs before July 1 since Mark McGwire in 1987, according to the Elias Sports Bureau…Abreu joins the Braves’ Bob Horner as the only players with four multi-homer efforts in their first 67 games…these two gems from @ckamka: Jose’s numbers since returning from DL: .319/.364/.703 with 10 homers, 21 RBI in 23 games and the Sox first baseman has now homered off of four different former Cy Young Award winners (Justin Verlander,David Price, Clayton Kershaw and R.A. Dickey).
Minor League Move
The White Sox have signed minor-league RHP Daniel McCutchen and assigned him Class AAA Charlotte. McCutchen, who has made 109 appearances in the major leagues, started the season with the Rangers.
Quote of the Day
Injury expert Will Carroll on Sox trainer Herm Schneider:

“Herm Schneider is a sorcerer. Anything that is probably the average, I would probably take the under on anything he gets his hands on.” 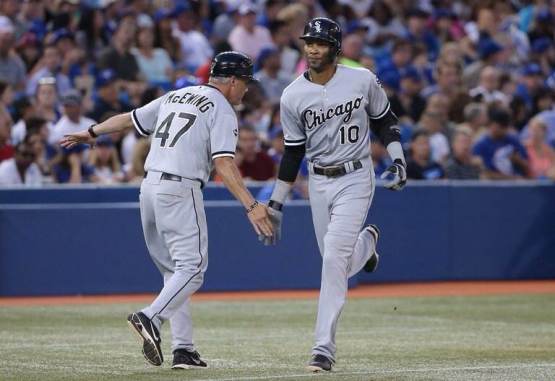 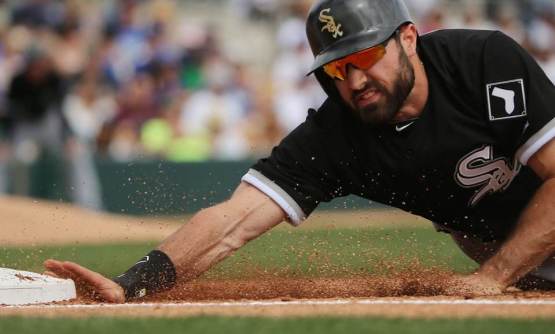 Adam Eaton reached base five times on a pair of singles, a double, triple and a walk and also stole a base while Jose Abreu smashed homer No. 23 (click top link below) in the White Sox’ 5-4, 12-inning loss to the O’s…Hector Noesi pitched his finest game in a Sox uniform, allowing just two runs in seven-plus innings work…Gordon Beckham made a brilliant, perhaps game-saving, play on the shortstop side of second base in the 10th inning (click on bottom link)

By virtue of his home run last night, Abreu has reached his 23rd career homer faster than anyone in baseball history. The fact that he did it in 65 games places him ahead of both the Mark McGwire of the A’s in 1987 and the Boston Braves’ Wally Berger in 1930, who both hit their 22nd through 65 games. If that weren’t enough, Abreu owns a 10-game hitting streak and is batting .357 with four home runs and 10 RBI during that span.

Eaton has now reached base safely in 20 straight games, including a current 12-game hitting streak…Alejandro De Aza is hitting .382 with six doubles in his last 18 games…Adam Dunn has four homers and 10 RBI in his last 17 contests…Conor Gillaspie is hitting .351 over his last 34 games…coach Harold Baines won’t be with the Sox in Toronto–for good reason. He’s attending the wedding of his daughter on the Eastern Shore of Maryland.

LHP Scott Downs has been designated for assignment. Taking his spot on the active roster is LHP Eric Surkamp, named the International League Pitcher of the Week for Class AAA Charlotte after going 1-0 with a 0.64 ERA and 15 strikeouts in two starts from June 16-22.

Surkamp (pictured below) also leads the IL in strikeouts with 84 Ks in 14 games (11 starts) this year. He has averaged 11.6 strikeouts per nine innings over his last four starts, including a season-high of 12 on May 30 vs. Toledo. The newest Sox pitcher had seven starts in two big-league seasons with the Giants in 2011 and 2013.

Replacing Surkamp on the Charlotte roster is RHP Chris Beck, ranked as the ninth-best prospect in the White Sox system by Baseball America. Promoted from Class AA Birmingham, he makes his Class AAA debut tonight against the Louisville Bats.

Congratulations to former White Sox Amateur City Elite (ACE) star Ro Coleman, a member of the Vanderbilt baseball team that defeated Virginia, 3-2, last night to win the College World Series for the first time in the school’s history. And a special tip of the cap to Sox Director of Youth Initiatives Kevin Coe and his dedicated group of talented coaches for mentoring young men like Ro and Corey Ray, who reached the 2014 CWS with Louisville.

Another Team for Sox Fans to Root For…

A group of Wounded Warriors made their way through U.S. Cellular Field today. 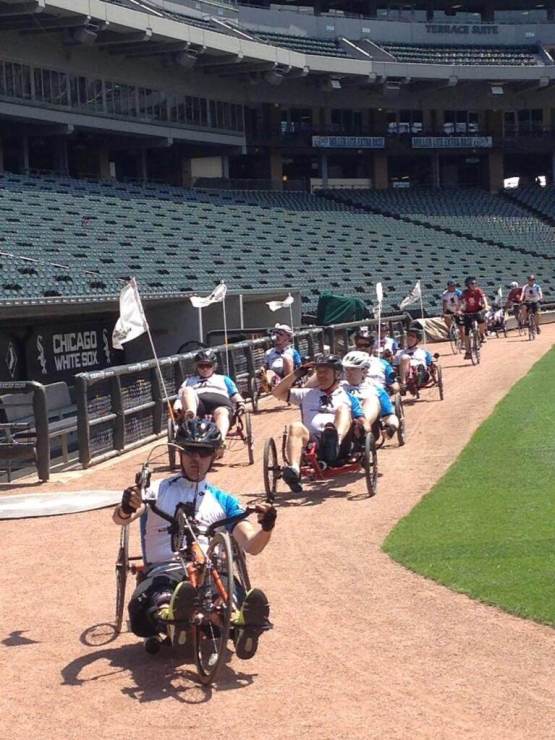 Jose Abreu is like a trophy that needs to be shined after hitting home runs. #WhiteSox http://t.co/DMfszSYwev

The Big Hurt‘s high school in Columbus, Ga. is certainly getting into that Hall of Fame spirit as their notable alum will be inducted July 27 in Cooperstown.

Makeup Monday After a Winning Sunday

Paulie Talks with the Ripkens

Listen to Paul Konerko as he visits with Cal and Billy Ripken last Friday on the MLB Radio Network:

Wins (For a Pitcher) Aren’t Everything

Avisail Garcia and Jeff Keppinger each collected three hits and two RBI and Conor Gillaspie drove in two runs with a triple and scored three times in yesterday’s 6-3 win in Detroit. Erik Johnson chalked up his second major league victory, and second straight, allowing just two runs in 6.2 innings to lower his ERA to 2.82.

Here’s Conor’s triple in the fifth inning and Jeff’s double that scored two runs in the seventh:

A very positive tweet and a look ahead to 2014 from our whitesox.com beat writer after the Sox scored three runs in the fifth inning yesterday and held the Tigers scoreless. Avi singled in a run, Semien singled and scored, Gillaspie tripled in the two runs and Johnson retired the side in an uneventful fifth:

…that Avi Garcia is now hitting .375 with 12 RBI in his last 16 games including 7 for 15 with a homer and five RBI against his former Tigers teammates over the weekend? He’s also playing great defense as evidenced in yesterday’s game by his diving catch to rob Prince Fielder on a line drive in the sixth inning.

Two in a row for Erik.

Today’s News
The Game
Final: White Sox 4, A’s 2
1983 Royalty
This afternoon’s ceremonial first pitch honorees were two of the major factors in the success of the 1983 “Winning Ugly” White Sox, who won the American League West by 20 games–Tony LaRussa, who was the ’83 A.L. Manager of the Year, and LaMarr Hoyt, the league’s Cy Young Award winner that year. Here they are before the start of today’s game:
https://vine.co/v/bLQ9vAtFb1F
Play(s) of the Day
Call it a seven-way tie.
Tyler Flowers’ solo homer in the third inning which tied the score at 1-1. atmlb.com/11P99Zi
Hector Santiago‘s outstanding 6.1 innings as he allowed just one earned run and four hits along with six strikeouts.
Gordon Beckham‘s run-scoring double in the fourth inning. atmlb.com/11Pbt2G
Jesse Crain‘s 1-2-3 eighth, which extended his personal high of consecutive scoreless appearances to 25.
Alex Rios‘s 11th blast of the season in the eighth which gave the Sox an insurance run and a 4-2 lead. atmlb.com/11Pjlky
Addison Reed’s 1-2-3 ninth for his 19th save.
And last, but not least, Conor Gillaspie’s three sparkling plays at third and his sac fly in the fourth.

Quote(s) of the Day
As the Sox paid tribute today to the ’83 White Sox as we do every Sunday, here is the second in a series of quotes we’ll excerpt this season from Bob Vorwald’s book, “What It Means to Be a White Sox.” Richard Dotson, a 22-game winner in ’83 and now the pitching coach at Class AAA Charlotte, talks about the night, September 17, that the Sox clinched the division title:
“The night we clinched was really exciting. Any time you do something like that, you are excited and also looking forward to the next step. Big leagues, minor leagues, no matter where you are, you want to win. It’s more rewarding when you go out there and feel like you’re acomplishing something. Being able to share that with 24 other guys, the coaching staff, the traveling secretary, the whole front office, was a blast.”
And here’s pinch-hitter extraordinaire Jerry Hairston sharing his memories of ’83:
http://atmlb.com/11AMjJj
Tomorrow’s Schedule
White Sox vs. Blue Jays at U.S. Cellular Field (7:10 p.m., CT, CSN+) in the opener of a three-game series. Starters: RHP Dylan Axelrod (3-4, 3.73) for the Sox, RHP R.A. Dickey (5-7, 4.66) for the Jays.
Did You Know…
…that the following were all drafted by the White Sox yesterday, the last day of the June amateur draft?:
* Nick Parent, 1B, Cal State-Monterey Bay, on the 36th round (son of Sox bench coach Mark Parent).
* Cody Yount, OF, Virginia Commonwealth, on the 37th round (son of former major league pitcher Larry Yount and nephew of Hall of Famer Robin Yount).
* Audry Santana, SS, Eckerd College, on the 38th round (son of former major league shortstop and ex-Sox coach Rafael Santana).
* Ronell Coleman, 2B, Simeon Career Academy, on the 40th and final round (member of the White Sox Amateur City Elite program).
It’s also interesting to note that Adam Law, INF, Brigham Young University, was selected in the 12th round by the Dodgers. He is the son of former White Sox infielder Vance Law, currently with the Sox as a special assistant to player development, and grandson of one-time Pirates’ Cy Young Award winner Vern Law.
Photo/Video of the Day
An inspiration…
http://mlb.mlb.com/cutfour/index.jsp?partnerId=ed-7174303-565204063#contentId=50054606
| back to blog home |
Theme: MLB “pro” | Get a free blog at WordPress.com