The Fans Have Spoken: Sale is an All-Star

And a big congratulations and thank you to all my extraordinary colleagues in the White Sox organization who have been working 24/7 since Sunday to make sure Chris was an All-Star for the third straight year.

Quintana is 2-0 with a 0.94 ERA, 31 strikeouts and .188 opponent average in his last four starts, all of the quality variety. Jose currently owns a 15.2 scoreless innings streak and has allowed just one earned run over the last 25.2 innings. He is one of 13 American League pitchers since 2012 to work seven-plus scoreless innings at least eight times.

Sale was brilliant last night, allowing a run and four hits along with six strikeouts in 7.2 innings, but the bullpen couldn’t protect the Sox’ late lead in the 5-4 loss to the Red Sox…Abreu and Conor Gillaspie each went 2-4 with a homer–it was Jose’s major-league high 28th (tied) and Gillaspie’s third of the year and second in as many nights (click on links below)…Alejandro De Aza was a homer shy of the cycle.

Abreu’s 28 homers, 48 extra-base hits and 192 total bases are the most by a first-year player before the All-Star break since the first All-Star Game was played in 1933. He also has 70 RBI, is slugging .627 with a .961 OPS…Sox starting pitchers own a 2.61 ERA in the last 16 games (since June 23). It’s the best mark in the AL and third-best in the majors…Sox first-base prospect Rangel Ravelo now owns a 25-game hitting streak for Class AA Birmingham, second longest streak in the minor leagues this season…Class AAA Charlotte catcher Josh Phegley has been named to the 2014 International League All-Star team. Phegley, who spent part of the 2013 season with the Sox, leads all IL catchers with 13 home runs this season. He joins teammate Tyler Saladino, previously elected as the IL’s starting shortstop, as the Charlotte representatives for the Triple-A All-Star Game on Wednesday, July 16 in Durham, NC.

Quotes of the Day

Everything (almost) you ever wanted to know about Chris Sale via @danhayesCSN:

* Most ice cream cones consumed in one day: 5 (twice).

* Most calories consumed in a day (estimate from John Danks with help from trainer Allen Thomas: 5,000-6,000.

* Favorite saying: (with help from Flowers): “Was that a good pitch?” said after hanging a slider.

* Go-to karaoke song (with assist from Flowers): “Man in the Mirror,” Michael Jackson.

* Most random fact about him (assist from Danks): “He’s really good at ping pong.”

* Number of remote-controlled cars owned: One because he gave the second to Daniel Webb.

* Favorite video game: “Putting me on the spot. Three-way tie between NHL, FIFA and Call of Duty (Zombie mode).”

* Favorite snack food: “Pretty much anything. Whatever I can get my hands on.” Said he “goes off” at Wendy’s.

* Sport he’s good at besides baseball (with an assist from Danks): “He’s a pretty good golfer.” 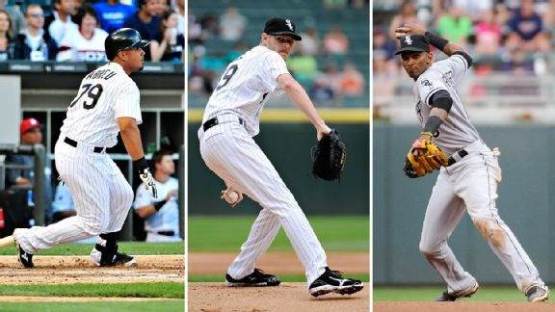 White Sox vs. Tribe: A Friday the 13th Matinee

Barons One Game Away From Title

The Birmingham Barons, the Sox’s Class AA affiliate, are a game away from their first Southern League crown after defeating the defending champion Mobile BayBears, 8-2, last night in Mobile to take a two games to none lead in the best-of five championship series. Game 3 is set for tonight at Regions Field in Birmingham.

Paulie hit his 11th homer of the season, a solo shot, and 433rd of his career in last night’s loss to the Indians. Konerko is batting. 339 with three doubles, two home runs and eight RBI over his last 16 games…INF Marcus Semien had a pair of hits, including his first major-league extra-base hit (a double)…Miguel Gonzalez recorded his first major league hit (a single) and Avisail Garcia added two singles. Avi is hitting .333 in his last 26 games, including 10 multi-hit efforts…Dylan Axelrod, with his 5.0 scoreless innings, made the longest relief outing of his career.

Quote(s) of the Day

I posted yesterday that rookies Semien and RHP Erik Johnson were among the players named to Baseball America‘s 2013 Minor League All-Star first team and were teammates on the University of California-Berkeley squad that made it to the 2011 College World Series.

Colleen Kane points out in today’s Trib that they were also roommates at Cal and played summer ball together in the Northwoods League in Minnesota as well as being drafted the same year (2011) and called up to the majors on the same day (September 3).

“We’ve been together through everything, actually,” Semien told Kane.“It’s pretty cool. If you have any questions, you can always go to him and ask because we’ve kind of gone through the same things. You don’t feel like you’re alone through this.”

Johnson added:  “It makes me comfortable when he’s out there playing behind me.”

…that PK leads all active players with 48 homers against the Indians?

Santiago is on the mound today looking to even the series against Cleveland. 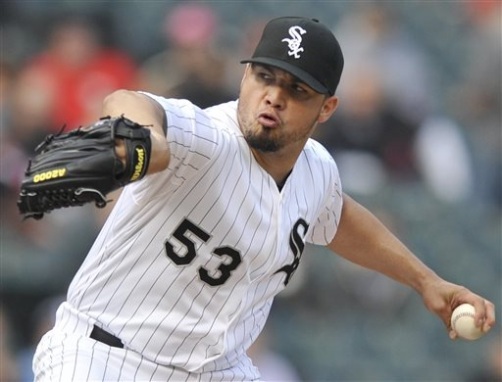