Even the most loyal White Sox fans (likely) don’t know every corner of U.S. Cellular Field. To help celebrate 25 years in this stadium, we will be bringing you a behind the scenes look at some of the lesser-known and off-limits parts of the park. Check back each week for another look at the home of your White Sox!

In honor of this Saturday’s 1976 throwback game, we are taking a look at some of the 1970’s memorabilia we have here at the ballpark.

On August 8, 1976, the White Sox made history by stepping out for their game against the Kansas City Royals in shorts (as seen above). What was planned to be the series uniform only lasted one day, as the guys found it difficult (and painful) to slide with exposed legs. So how did that game go? Take a look for yourself at the scorecards we have from that day:

The Bard’s Room is the dining room for White Sox investors, guests, front office employees and members of the media during games. It is also home to old jerseys full of White Sox history, including those from 1971-1975 and 1976-1981, alongside the names of some of the most memorable players from that era. 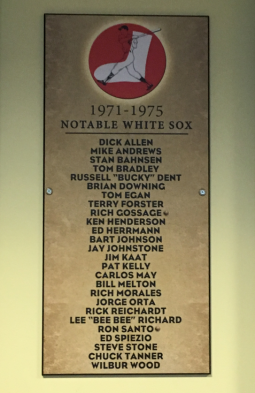 Lamar Johnson sings the national anthem prior to game.

And last but not least, here is a picture of the 1976 Bicentennial celebration at Comiskey Park, featuring HOFer Bill Veeck:

Don’t forget – the first 20,000 fans to Saturday’s game against the Detroit Tigers will receive this 1976 replica jersey!

We hope you enjoyed revisiting the 1970’s White Sox! Be sure to check back next Thursday for more scenes Behind the Ballpark.