“Looks that way,” I replied.

“Good, I like things that break up the routine,” Cooper smiled.

Today was indeed unofficially NASCAR Day at White Sox spring training with four members of Michael Waltrip Racing stopping by to suit up, take part in drills and take a little batting practice.  The team is in Phoenix for this weekend’s NASCAR series (check out FOX for Sunday’s big race).

“I’m not an athlete,” Reutimann offered to Mark Buehrle and John Danks.  “I just wait five seconds and then turn left.”

Buehrle, Danks and Jake Peavy attended Friday’s race and planned to go to Saturday’s and Sunday’s as well.  Danks grew up annually attending the race in Texas.

For manager Ozzie Guillen and others, the take was a little bit on the amateur racing side.

“I thought the one guy was Justin Bieber,” Guillen offered.

“You don’t do a whole lot of stretching before you drive?” Buehrle laughingly asked Reutimann.

With the drivers featuring their car numbers on their uniforms thanks to Sox equipment man Vince Fresso, Waltrip held court in the Sox clubhouse.

Once out on the field, Guillen offered advice.

“Where are you guys hitting,” the manager asked.  After hearing the answer, “Oh, sheet.

After a few swings and misses and a few solid hump-back liners, Waltrip stepped out of the cage.

“Do we have a wider one,” Reutimann asked as he stepped into the cage.

Look closely on Sunday and you will see a White Sox All In logo on Reutimann’s Toyota car. 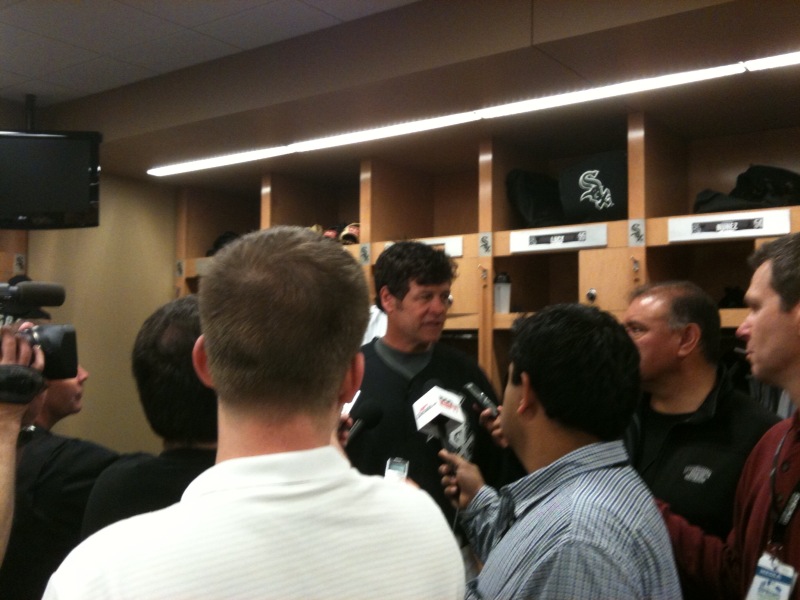 So I dutifully called my wife last night after dinner to check in and say hello.

“We’re watching a movie,” she replied.

“No, what’s the movie about?” I clarified.

“Denzell Washington.  Can I talk to you later?”

As I said last year, junks was a “cancer” on this team. Glad he’s in boston with all the other overpaid underperforming loonies. See Ozzie’s comments in this article:

GLENDALE, Ariz. ? It?s the Guillen family vs. Bobby Jenks, Round 2.

Right after Christmas, Jenks took some shots at White Sox manager Ozzie Guillen and said he looked forward to playing for his new team, the Boston Red Sox.

Advertisement Oney Guillen, Ozzie?s middle son, blasted Jenks on his Twitter account and turned the spat into a national story.

Two days ago, Jenks had similar critical thoughts about Ozzie and the White Sox in the Chicago Tribune.

Initially taking the high road after being asked about Jenks after Saturday?s workout at Camelback Ranch, Ozzie Guillen eventually fired back.

?First of all he can?t make any comments about last year because he was never in the clubhouse,? Guillen said. ?He spent more time at his house than he did in the clubhouse. They told me about it. I didn?t read it yet. The only thing I can say is that I feel bad for him because I think the way we treated this kid, just the White Sox and myself, or our front-office people, we helped him a lot on the field and off the field.?

?I don?t want the aggravation again talking about his thing,? Guillen said. ?But he better be careful talking about Oney because Oney knows a lot of stuff about him. I just talked to Oney to make sure he lets that thing go. But if Oney said everything he knows about Bobby Jenks, it wouldn?t be a pretty thing. I said (to Oney), make sure you don?t say anything because he has a family, I respect his wife, I respect his kid. I?m not even mad. I wish I was mad about it because I will rip (Jenks?) throat (out).?

Ozzie was not finished.

?Too bad that all the stuff we had between me and Kenny (Williams) interrupted his career because he did a lot of bad things last year,? Guillen said. ?We lied for him, we protected him. I?m the first manager in the history of baseball to give a guy a week off to take care of his kids when his father-in-law was sick. It wasn?t even his wife. But it was out of respect I have for his family.

?I sent him home because he had to babysit his kids because his father-in-law was sick. I don?t think any manager is doing that. But coming from him, I expect that.?

Guillen and Jenks clearly were at odds for most of last season, and the two barely talked after the all-star break.

?Just be careful about what you say about Oney because Oney will say stuff he?s not supposed to be saying. That?s just a warning for him. Just stay away and don?t name Oney for this because it will be pretty ugly.?